It's not like I ignored books that didn't have pictures in them, it's just that I went for the pictures first. And Boys' Life had pictures. I preferred the psychedelic art of Tom Eaton (Pedro the Mailburro, Dink & Duff, Webelos Woody) to the more realistic (and hilariously melodramatic) True Stories of Scouts in Action, but the gems were the comic books. My first encounters with the Odyssey, Treasure Island, and more came from the simplified, abridged versions in that magazine. Images from these comics share space in my memory with those from the Castle of Doctor Brain video game and Dunc and Amos short novels, a nostalgic place that doesn't make much sense but looks striking.

I recently discovered that the entire archive of Boys' Life through 2012 has been made available through Google Books, and so of course I've been tearing through it, again going straight for the pictures. "Norby the Mixed-up Robot" was written by Isaac and Janet Asimov, with perfectly serviceable art by Ernie Colon. The "and" really shows. Apparently Isaac mostly had his name attached for publicity. The story takes place over eighteen chapters in seventeen months, each chapter only one page except for the double-page first issue. Jeff Fargo is a whiz kid who can hack into the Academy computers to find homework help but he's not smart enough to actually learn the subjects.

He's got a good teacher and a bad teacher. Bad teacher wants him expelled because he doesn't have money, good teacher gives him a check to buy a robot. Not an actual good robot, he only gets enough to buy a rustbucket that immediately sprouts cartoon eyes and teaches him Martian telepathically.

Norby was put together from lost alien technology, so he's got amazing superpowers. As the universe is about ten acres across they immediately encounter Jeff's brother Fargo fighting the goons of Ing the Erciless. They join in and Norby gets to show off that he can fly and that he's not Three Laws compliant. 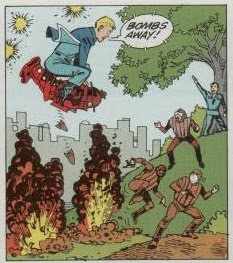 Unfortunately while Fargo's being arrested by his love interest, Albany, Ing is aking his ove. For some reason his well-organized, well-equipped goons are kicking doors of low-ranking officers. Jeff and Norby are rescued by Albany, then immediately captured by Ing's men. Norby teleports them to Fargo, and they're surprised to find he's also been captured by Ing even though Albany told them that two pages ago. Hey, it was two months in real time.

Norby foils Ing's plan by teleporting himself and Jeff to an alien world, and Fargo and Albany to who knows where. Norby can't teleport them back without coordinates of the new planet, which are conveniently given to them by an irate Velantian. 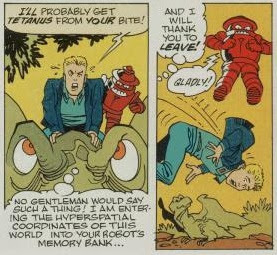 On their return they find that the neighborhood and by extension the Solar System are on the verge of falling to Ing, so Jeff finds a local church lady to lead the rebels on a counterattack.

The war taken care of, Jeff and Norby teleport to Space Command, where they arrange a secret mission to capture Ing directly. Ing gets punched by Norby's telescoping cartoon arm and is revealed to be the bad teacher that wanted Jeff expelled. 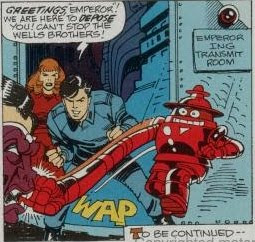 The neighborhood and by extension the solar system are saved, and the admiral grants complete immunity to Jeff's alien god-robot. 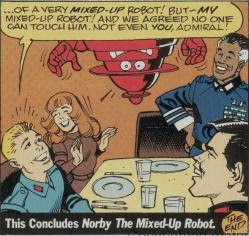 The story is a mess. Its scope is ridiculously small, none of its characters were able to make an impression even in what screen time they had, and plot holes are more a rule than an exception. It feels thrown together, and more than adventurous it's just weird.

I'm glad I didn't read it all back then, because I'm sure even then I would have been disappointed. It was probably a neat thing to pick up again every month, though. Many of these issues also had Isaac Asimov articles about tech progress in the future, and those were much better. These were some of the last publications Asimov made before his death.
at 11:00