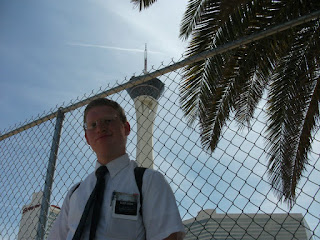 Some days we worked our way up to Naked City. If we had dinner on the west side, we might stop in at a name nearby; occasionally we had dinner there. It had a bad reputation, which of course its residents were proud of that if only for the notoriety. The neighborhood felt somehow more sad than the rest of Parkdale, which I don't think was entirely my imagination. Street contacts were more rare and less fruitful. Above it all the Stratosphere towered, a needled tower like some kind of space ship, with a mirrored hotel at its base that dramatically reflected any clouds in the sky.

We knew a shortcut for time emergencies, but taking Sahara gave us more human surface area. The strip malls got shabbier and petered out, the storefronts grew bars, the sidewalks were wide, there was a proponderance of jewelers. At the end, or what may as well be the end, was the Strip. "Don't breathe," said Ballard, but I couldn't if I wanted to. It was sickening, not for anything in particular, for the loose women on TV screens and trash on the ground, for the lights and sounds - there was an evil spirit there. But we powered across. We could have crossed farther north, where it was tame - actually using Las Vegas Boulevard, not just crossing it, was unthinkable - but this was more direct. Well, really, every now and then we reminded ourselves what it was we were fighting.

We didn't cross the Strip on the way down. We didn't always take all of Sahara going home. It was early in the year, so always night on the way back, and downhill most of the way. We followed the bus, trying to get far enough ahead that we caught the people at the stop without losing them right away. If it was late we sailed on down, past the car dealerships and apartment complexes and Boulder Highway and finally an abandoned furniture outlet store with a massive parking lot, senior trailer homes to our left across the street behind a wall, and to the right was the Sahara Lamb apartment complex. Take a right after entering, cut left across a sidewalk, right again, to a ground-floor apartment on the northwest side of the building, and to our desks for nightly planning.

It was warm, the air was thick. The days were bright montages of bricks and asphalt and characters, everyone wearing some uniform of the ghetto but each betraying a glimmer of uniqueness beneath. It was a magical place, really my favorite of the low-income areas I served in, with a lot of symbolic value even towards the end of my mission, as we see in this poem I wrote in my last area, in July 2011, titled "Sentinels:"


From the tops of the mountains
We carved these canyons
We flowed down these streets
Wingspans displayed, steel chariots

Blur. So eyes blink
Sleep won't clear.
We split rocks with our feet
We stand undaunted
We stand guard.

I'm not sure I was satisfied with that last line.

I haven't tried any poetry since a few months after I came home. Haven't had the urge, haven't felt confident. This example seems a bit pretentious, but it's about a time when it was good for me to be proud. I am still proud of the feeling contained in it.

Email ThisBlogThis!Share to TwitterShare to FacebookShare to Pinterest
tags: if I recall correctly