The Giant's Heart by George MacDonald 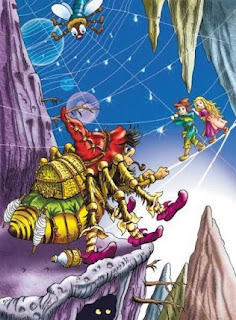 The second story in The Light Princess and Other Stories shows off MacDonald's skill in developing sympathetic yet evil villains. It's shorter than the others, and wastes no time in sending our two child protagonists into a child-eating giant's house. Watch MacDonald show us how the giant justifies himself:


To be sure he did eat little children, but only very little ones; and if ever it crossed his mind that it was wrong to do so, he always said to himself that he wore whiter stockings on Sunday than any other giant in all Giantland.


How many villains get this much of a chance to defend themselves? MacDonald knows and loves sinners. He understands how they think. Listen to the giant's wife, who helps the children escape but does nothing for the other dozen kids lined up for the giant's snack:

"I am not sure of that. He is so fond of them that he eats them up; and I am afraid he couldn't help hurting you a little. He's a very good man though."


Or the other children:


Now, what made them very wretched indeed was, that they knew if they could only keep from eating, and grow thin, the giant would dislike them, and turn them out to find their way home; but notwithstanding this, so greedy were they, that they ate as much as ever they could hold. The giantess, who fed them, comforted herself with thinking that they were not real boys and girls, but only little pigs pretending to be boys and girls.


Everybody's miserable, in a system that doesn't really have to continue. What makes the heroes special is their proactive search for a way to not be miserable anymore.

There are also songs, spiders, a little action; not as much of a science-fiction mindset as The Light Princess, not the same grandeur of description as in The Day Boy and the Night Girl, not as much power as The Golden Key, which follows it. I can't help but think of that giant sometimes, and his wretched excuses. It's a story about an easily preventable tragedy.
at 20:17