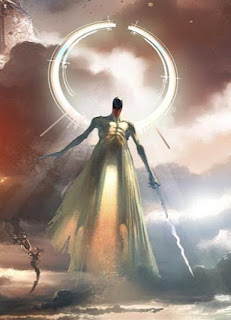 I have seen visions.


The reductionist perspective, so helpful in seeking the mechanisms by which God effects change in our lives, would ask me: "Could those not have been mere hallucinations, not revelations from God but misfirings of neurons, drawing together vision and meaning and carving them into your fleshy tablets?"

Of course I'm sure they weren't hallucinations. They were daydreams. From time to time, and mostly years apart, an image cycles into my mind that resonates there, one that I cannot keep myself from contemplating. It will draw on available material from my imagination and memory and share traits with dreams and hallucinations, in that not only sensory data but semantics are encoded in it; a flash of enlightenment, you could say.

The need to justify a statement like this shows the dreadful encroachment of materialism into our culture. This note is for anyone reading in a few years when things have calmed down.

I could easily explain these manifestations without claiming divine intervention. I won't. Their utility is proven and their beauty unparalleled. They shape and underscore many of my goals and much of my worldview. I like them.

Here's one, I believe from the later days of my mission. I am hiking in a mountain range, image courtesy of the dirt mountains southeast of Las Vegas. My wife is with me. We reach the top of a rise, and below us see in the dusty basin a bright city, lit with multicolored neon, one that has not yet grown to the mountain's foot. We descend to the city and are received as guests, and learn that these people know us and revere us as their progenitors. Hold that thought.

"If God Didn't Exist We'd Have To Make Him"

The Campbelline science fiction writers and many of their intellectual descendents assumed that religion would be replaced by science, in one of modernity's more embarrassing non sequiturs. In the last decade, though, we've seen that idea take hold in a few, in the transhumanist movement. This relentlessly optimistic philosophy opposes the prevailing cinematic view of science as inherently reckless, declaring that through science humanity will soon achieve inexhaustible prosperity, infinite comprehension, and eternal life.

This path to Heaven involves the creation of machines smart enough to understand themselves and make improvements. Their descendants would solve all unsolved problems in science, including the social sciences, for what is the brain but a computer? I would remind the skeptical that through modern medicine we have proven our ability to force one's personality to do flips on command - though, sadly, it's still far easier to break a psyche than to repair it, let alone improve it, as we would see our benevolent computer-based grandchildren do.

Here we see, potentially, the roots of a belief system that could someday form a world religion, and be based on more or less rational if saccharine observations. Death can be treated as a disease and cured, or the body itself discarded for apotheosis in a thinking machine moving bits of quark and neutron, feeding on mass and energy, pure and immortal. With such intellect, we could negotiate settlements to end any dispute, create works of art beyond mortal comprehension, develop our faculties to experience such joy we can hardly stain it with such drab words, and even create companions like ourselves, perhaps after sending them through a simulation of our own earliest days to develop in them understanding of our origins and gratitude for their exaltation.

Transhumanism and the Latter-day Saints

I can only think it's some cultural barrier between Mormonism and transhumanism that keeps this obvious syncretism from being more popular, really. There is a Mormon Transhumanist Association, which I recalled after stumbling upon a Xenosystems article recently that used the term "intelligence" in an interesting way. Mormon ears prick up at that.

Note for the interested: I do not believe the interpretation of Mormon cosmology in Skousen's Building Blocks of the Universe to be an accurate one.

The MTA, under a rather pretty winged wagon wheel logo, declares its goal to be the use of technology to exalt and transfigure mankind, to view the promises of millennial glory as more of an instruction handbook than a brochure. This perspective is attractive to me, and one I had derived independently long before I learned of the MTA, though it hardly reaches the surface of conversation now. Their philosophy they name "transfigurism," a word that shouldn't be as awkward as it is, and there's something wrong with them.

I can't place it, not fully. Can't articulate it. Something seems off. Maybe I just don't want to use the crude vocabulary that would suit the problem? Pozz. It's pozzed. Weak. Meme-riddled.

Here's their affirmation. They talk about ecumenism before transhumanism. Warning sign. It's good doctrine on its face but the truths of other religions are there to be reclaimed, not merely acknowledged. "Seeking exaltation according to wills, desires, and laws, to the extent they are not oppressive." Warning sign. Too mealy-mouthed. Not subservient enough to the one Law for me. And some things need oppressing. A disclaimer to avoid risks of science, prudent enough, and yet another note to non-predatory ecumenism.

Here's their about page. Utah-based, that's a warning sign. From their 2014 survey, 62% of the Mormon Transhumanist Association is Mormon and a whopping 59% are theists. On a progressive-moderate-conservative scale they are 53% progressive in politics and evenly split in economics. There's an item in the FYI explaining how you can join them even if you don't believe anything they stand for because interpretation of their Declaration and Affirmation is your responsibility. Not boding well.

That's what I couldn't put my finger on - it's collectivist. It's we, we, we. If you want to be gods, where is your ego? Would you be non-jealous, non-threatening gods? That is an integral part of our Father's personality, you know. There is no mysticism here.

There is no fear.

God lives in thick darkness. He is terrifying. He is a man of war. He raises up generations and casts them in the water to drown, he exalts the low and abases the high, all the nations of Earth are his sand-castles - and we wish to become like Him. This is an activity he fully sanctions, but we have to repent first. Easier said than done. It requires a sacrifice of Christ and a sacrifice from us - this isn't something that is just going to happen as a mechanical process, something manageable, something that doesn't overwhelm us.

I want to reaffirm that I do believe human progress merges with divine providence, that our first steps to transfiguration may well be begun by earthly doctors and continued by angels; but I don't believe any of the process will be easy. It won't just happen to us. We can't be, how to say it, smartphone people and achieve exaltation. There must be vigor in us.

Why is it that it feels strange to talk about having visions and about transhumanism at the same time? We Latter-day Saints of course believe in marvelous visions and revelations of all kinds. Increased knowledge of the natural world should not rob these things of wonder. On the contrary, our wonder in these many miracles should extend to scientific discovery and technological advancement. The threat of our research outpacing us and causing widespread devastation should not be met with the wide-eyed pragmatism of the protester or the cost-benefit calculations of the contractor, but with the fear and trembling of the converted philosopher.

How would Moses react if you told him you were working on a machine that could perform basic transfiguration? "Oh, my, what will they think of next?"

I don't believe that the afterlife will be so different from our lives now. Basic principles of heroism, friendship, and sacrifice will still be present. Our stories will continue, and we will experience things, I feel, much more similar to the events of pulp novels than to the distant-yet-cloying ruminations of modern religious authors. The adventure will continue, better than ever. Posterity will continue.

The future is breathtaking.