The Edge of the World by Michael Swanwick 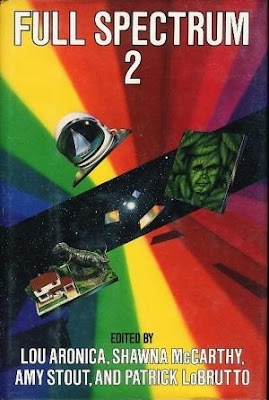 We did a lot of reading when I was growing up. If we had grown up on the set of a movie about precocious children we would have been reading classics to each other, referencing lines the audience would be able to pat themselves on the back for remembering, but I have to admit that a lot of what we read was pretty generic, all things considered, and while the Fantasy and Science Fiction shelves of the public libraries in the Kansas towns of Augusta and El Dorado held great treasures of wonder, there were greater treasures that I missed¹.

One library book, and I can see the bunk bed I read it on right now thinking of it, was called "Full Spectrum 2." There was another Full Spectrum close by but I don't think it hit me as hard. Two stories especially landed in my mind with such power that they still make their way to the front. One was about an RPG group (something we would have had if we had grown up on the set of a movie about precocious children in the 90s) that used drugs to hallucinate their sessions, and an Asian domestic servant who used their drug to astrally project instead; the other was about some Cold War Army brats and a bottomless cliff.


It blew me away. A melancholy story, some loser kids on a base on the edge of the world taking a trip down some creaky industrial stairs to an ancient monastery where wishes are granted wrong. I didn't understand all of the references it was making, I knew that then, but somehow the idea of a tribe of wishing ascetics blended perfectly with the adoration of Kennedy funereal imagery, and the cliff where you can look down and see the moon that Neil Armstrong walked on rise - the cliff where Napoleon tried a cannonade, see, it was woven into real history and it fit, it was like Mindquakes in how much it shattered my expectations at the time, and I thought about it a lot and didn't read it again for probably about fifteen years.

I was, as is my custom every few months, trawling through short story anthologies looking for the one that I read in Salt Lake that had the teacher taking a trip on a liner that her father had paid for by selling himself for his pain to be used as fuel, when I came upon the list of stories in the Full Spectrum collections, and not only was there "The Edge of the World," it was written by Michael Swanwick, who I'd heard of in other contexts.

Let's digress here and talk about the Horns of Elfland and their attempted deconstruction. There's a certain wonder about classic fantasy, captured elegantly in The Lord of the Rings but not in those works ignorantly placed in his tradition², which I drank up when I found but didn't find much. I would have devoured Dunsany, Eddison, and MacDonald if I had heard of them. Swanwick himself marvels at the loss of these authors from our tradition - but is it any wonder our young authors haven't read them when I myself had to track down the Barsoom novels on Gutenberg? There was plenty of Shannara in the school library.

I hadn't heard of the Horns of Elfland. I was familiar, to be sure, no child who's read Narnia isn't; but I had thought that novels with those traits were miracles, not that there had been a genre made up of them. And to find out that I had made brief contact with Dunsany, in years when he would have done me incalculable good, through a deconstruction...

I first heard of Swanwick's The Iron Dragon's Daughter from a breathless SFF fan who declared that it turned every fantasy cliche upside down, even the ones where good things happen to good people. I will admit that I was not sold. When I saw John C. Wright's brief mention of the book in the articles linked above, his claim that it was an antifairy story stuck with me. I'd experienced things of the sort, I once had the misfortune to stumble across "The Problem of Susan," and I concluded that while Swanwick was doubtless a gifted author I would probably feel better deep in my throat if I stayed away.

Now here I return to this quiet, subtle story.


The day that Donna and Piggy and Russ went to see the Edge of the World was a hot one. They were sitting on the curb by the gas station that noontime, sharing a Coke and watching the big Starlifters lumber up into the air, one by one, out of Toldenarba AFB. The sky rumbled with their passing. There’d been an incident in the Persian Gulf, and half the American forces in the Twilight Emirates were on alert.

Donna is a confused girl, Piggy is an aggressively confused boy, and Russ is a depressively confused boy. They're worried about school, their love lives, and the impending nuclear holocaust, and they're bored, so they do what teenagers in small towns do, which is walk around town.

The Twilight Emirates are the kind of place Lovecraft and Dunsany wrote about, but eroded by time and Arab conquest, because why would pretty things last? The Edge of the World³ is a place where beautiful things used to be but aren't anymore.


Gone were the archers in their towers, vigilant against a threat that never came. Gone were the rose quartz palaces with their thousand windows, not a one of which overlooked the Edge. The battlements where blind musicians once piped up the dawn now survived only in Mrs. Khashoggi’s texts. Where they had been was now a drear line of weary factory buildings, their lower windows cinderblocked or bricked up and those beyond reach of vandals’ stones painted over in patchwork squares of grey and faded blue.

You can see why this might trigger a gag reflex in some people. I didn't know any better. I still think industrial ruins can be beautiful⁴ but I don't necessarily want cathedrals to be demolished for them to be built.

The kids go down some stairs built into the edge, picking their way past trash and graffiti, and have flashbacks about how nasty their lives are. They go much farther down than is safe, and all the while Donna wants Russ to make his move - not make her his valentine! Ha! This isn't a children's story where romantic love exists! Donna wishes it does, though. She thinks Russ should have been a Dunsany character instead.


Russ had been born out of time. He really should have been a medieval prince, a Medici or one of the Sabakan pretenders.

At the very bottom of the steps they find ancient caves carved in the rock, with the faces chipped off their statues because the Muslims have been through, and Russ explains what they were. He read his textbook, he's embarrassed to admit he enjoyed it greatly, and he explains that the monks who lived here separated themselves from the world and wished for treasure, which they flung over the Edge of the World as an ultimate rejection of the flesh. They even wished a wicked king, who sought to steal this treasure, out of existence completely.

The kids don't believe in magic, even though they're surrounded by it. They wish it were real, so much it hurts, and they make wishes. Donna wishes to understand every situation completely. Piggy wants to know how to get back up the stairs. Russ wishes he'd never been born.

And then he hasn't. Piggy doesn't remember him. Russ, who should have been an epic hero, suicides by magic. Donna can only remember him because she understands the situation completely. Of course, she can't understand the situation completely enough to stop Russ, because that wouldn't be unfair and tragic and Swanwick has friends reading this. She climbs to the top knowing that this knowledge will be a painful burden all her life. The end.

Now, I didn't hate this when I read it at first. I just read it as a be-careful-what-you-wish-for story, with some unearthly wonder on it and modern characters. The subtext of marvels beyond our ken stuck with me, and I'm sure it helped me enjoy classic fantasy when I found it. But looking at it now, doesn't that suck? I don't know if Swanwick was trying to do fantastic potlatch by throwing his wonder over the Edge of the World, but it feels more like his factories that sit on the edge and dump toxic waste over the side.

Here's this idea again, that since nasty things happen in real life and don't happen as much in fantasy, that fantasy needs to be written that only has nasty things happen. Donna doesn't glimpse beauty with her understanding, just pain, because that's the span of the world Mr. Swanwick created for her. And maybe he thought it was edifying to remind me that this world exists as well, the world of divorces and teen suicide and child abuse, but the other world has been forgotten, and his is what remains.

This is blasphemy. He graffitied his own temple. He built this temple with stones pulled from greater edifices. I wasn't familiar with any of his Dunsany references, but most of them can be found with an internet search, and here's how Lord Dunsany wrote about Toldenarba:


All the domes were of copper, but the spires on their summits were gold. Little steps of onyx ran all this way and that. With cobbled agates were its streets a glory. Through small square panes of rose-quartz the citizens looked from their houses... Clad though that city was in one robe always, in twilight, yet was its beauty worthy of even so lovely a wonder: city and twilight were both peerless but for each other.

And now it's just a crappy Air Force base. Congratulations.

That a thing can be done does not mean it should be.

¹I fortunately did not miss the Lord of the Rings trilogy, with its handwritten note in the margins late in Fellowship declaring "Legolas is awesome!"

²Including many of the fantasy novels I grew up reading - Death Gate is a fine series, and it has people called "elves," but they're just skinny people with more MP.

³We're not told anything about where it ends, or if the world's actually flat. If it is, it's not a plot hole for kids to be worried about bombers, not missiles, bringing in the Apocalypse after Kennedy, but then why is it special? If it isn't, how does it work? This omission doesn't detract from the quality of the work, and certainly didn't bother me when I first read it.

⁴Brutalist structures were very efficiently constructed to already be ruins.
at 23:34