N-Words: When Your Metaphor Gets Away From You 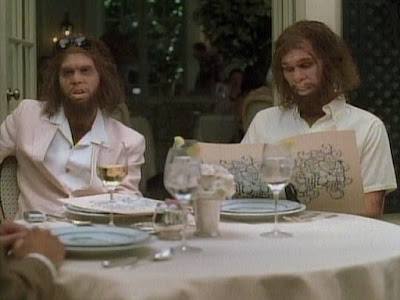 Writing parables is a tricky business. No metaphor can survive intense scrutiny; if it could it wouldn't be a metaphor. When you do write parables it's good to write parables that don't undermine your point.

As part of an ongoing quest to locate a very strange short story I read in 2012 I've been getting my hands on various contemporary SFF short story collections. A story titled "N-Words," by Ted Kosmatka, caught my eye; I found it in Hartwell and Cramer's Year's Best SF 14.

It's told mainly in flashback, beginning with a funeral surrounded by protesters, cast from the Westboro Baptist division of the Straw Christian Agency. The narrator's sister wonders aloud what kind of people could do this sort of thing, and the narrator thinks to herself that you'd be surprised. This is a story about racism, and stories about racism are never about obvious racism. Kosmatka wants to make a point about real-life racism. This is important.

The main part of the story has the narrator describing... well, I'll make it short. Neanderthals. Korean scientists clone Neanderthals, and they're pale-skinned, blue-eyed, red-haired scholar-athletes. Religious people hate them but that's because they're better than normal humans. "Neanderthal" becomes a slur people don't use; they call them "ghosts" instead. When ghosts begin to dominate the Olympics

It was suggested they should have their own Olympics, distinct from the original. Lawyers for the ghosts pointed out, carefully, tactfully, that out of the fastest 400 times recorded for the 100 yard dash, 386 had been achieved by persons of at least partial sub-Saharan African descent, and nobody was suggesting they get their own Olympics.

But of course "racist groups like the KKK and the neo-Nazis actually liked that idea" (that's an actual line) so we can't do that, they're humans and inferior humans have to deal with it like we did for sprints. This isn't going well.

The narrator meets a ghost in college, falls in love and gets married. Her husband, just after giving a speech about how hate and fear and trying not to be outcompeted by Neanderthals is wrong, gets shot by a thin, balding untermensch. The narrator stands strong, though, because their child is the best of both worlds, he's already reading at the age of two, and the haters have "no idea the storm they're calling down." She even calls it a war - but this time, the economy version of man won't be the one that triumphs. She gets out of the car and slaps a protester because she's so strong and angry. I can't imagine the author being unaware, but, well:

I see a sign held high as we pass the last of the protestors. They are shouting again, having found the full flower of their outrage. The sign says only one word: Die.

Not this time, I think to myself. Your turn.

So the moral of the story is that racism is bad and you should roll over for your white-skinned replacements. I can't imagine writing something that misses the mark so wildly. Kosmatka isn't even a blank-slatist; he acknowledges that the Neanderthals are smarter, but he says that's why they're going to win, vae victis. Could you write that entire thing, then go out and talk about it with people, proudly list it in your backlog without realizing you've made a rational, passionate, poignant defense of white supremacism?

He was going for, I think, a standard everybody-can-be-racist kind of story, you know, like the ones they used to print where blacks had white slaves to presumably pop the monocles off the racist plantation owners they were supposed to reach somehow. What we got was a Neanderthal supremacist telling us we're just N-words to them.
at 22:40